Free event to follow online on this page with simultaneous translation into English. 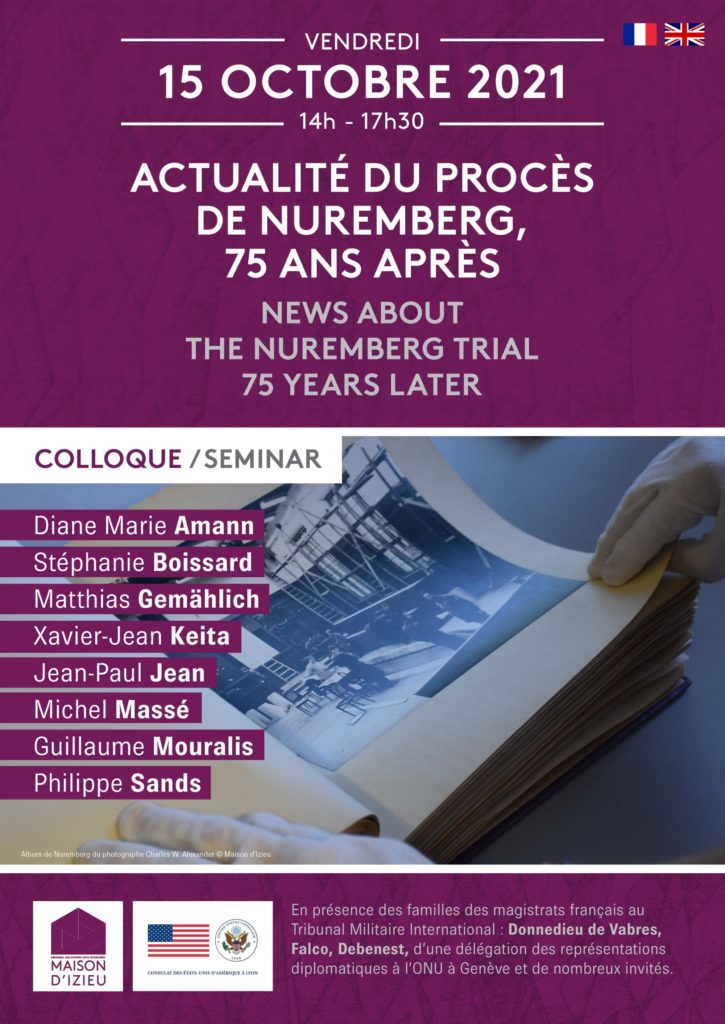 At the 75th anniversary of the end of the Nuremberg trial, the Maison d’Izieu presents the restored photo album of Judge Donnedieu de Vabres with the support of the US Consulate in Lyon. This symposium offers new means of understanding the role of this trial orchestrated by the Unitesd States and whose repercussions’s were worldwide; to question the notion of «race» 75 years later, the place of women during the trial and to query the possibility of an international justice day.

In the presence of the French judges families at the International Military Tribunal: Donnedieu de Vabres, Falco, Debenest, representatives of the diplomatic missions at the UN in Geneva as well as numerous guests.

Judge Henri Donnedieu de Vabres’ documents came to Maison d’Izieu throught Robert Falco (his deputy at Nuremberg) then Guy Bermann (civil litigator at the Klaus Barbie trial in Lyon) on the recommendation of Ugo Iannuci (president of the Lyon Bar Association at the time in November 2011). This collection is made up of almost all the judge’s working documents from the trial. In 2019, the family of Judge Henri Donnedieu de Vabres wished to entrust his personal archives to the Maison d’Izieu, in particular the photo album of the trial (containing 121 photographs). A copy was given to each of the judges present. This copy has been restored with the support of the US Consulate. Most recently in July 2021, the documents of the General Counsel in the French delegation at the IMT, Delphin Debenest, were entrusted to the Documentation and Research Centre of the Maison d’Izieu by his children.

The history of the Nuremberg Trial

The mentioning of the Izieu roundup in Nuremberg
On 5 February 1946, Edgar Faure referred to the Izieu case before the International Military Tribunal in Nuremberg. He read the telegram signed by Klaus Barbie and commented: “I think it can be said that there is something even more striking and horrific than the actual fact that these children were abducted. It is the administrative caracter that he handled everything with: the report that was made, according to the chain of command, the conference where different officials quietly discussed it, as normal procedures for their department. It is because all the ins and outs of a state, and I am talking about the Nazi state, were set in motion at once and for one purpose.”
Twelve other trials were held by Americans alone, again in Nuremberg and at the same premises. One hundred and eighty-four people were tried and grouped by profession: doctors, lawyers, senior civil servants, soldiers, police officers and industrialists. While many death sentences have been handed down, few have been carried out and some have been remitted.

Share on your social networks
We use cookies on our website to give you the most relevant experience by remembering your preferences and repeat visits. By clicking “Accept”, you consent to the use of ALL the cookies. However you may visit Cookie Settings to provide a controlled consent.
Cookie settingsACCEPT
Manage consent