The permanent exhibition is divided into three themes and is based on numerous archival documents and documentary resources that are integrated into digital devices.

Theme 1: why were there Jewish children in Izieu?

This first theme presents the historical context of Europe at the time of the Second World War and retraces the journey of the children of Izieu’s families.

The individual stories of the children of the children’s home of Izieu are compared with the history of anti-Semitic persecutions perpetrated by the French state and the genocide of European Jews in Europe by Nazi Germany.

Most of these children’s parents arrived in France between the wars and came from all over Europe. In October 1940, these families were hit by the Vichy regime’s anti-Semitic laws. The resulting policy of exclusion first led to foreign families being placed in French internment camps. Then, in the summer of 1942, Nazi Germany negotiated their deportation with France. Thanks to the unceasing action of aid organisations, some children were able to leave the internment camps before this murderous collaboration.

They were then placed in private homes or in children’s homes. One of these was in Izieu in the Ain department. It was run by a French Jewish couple from Poland and Russia respectively, Sabine and Miron Zlatin. For eleven months, the Zlatins took in nearly one hundred Jewish children. Most of them went to a relative or to another foster home. Some of them were smuggled into Switzerland. But the 44 children who remained at the Colonie d’Izieu saw their destinies shattered by the roundup of 6 April 1944.

Digital table: Journey of the children and their families

Thanks to the work carried out by the Documentation and Research Centre, discover the journey of the families of the children of the Colonie d’Izieu across Europe in an application gathering archive documents and testimonies. Research is continuing on the paths of the 105 children, and you can already discover about 15 of them. 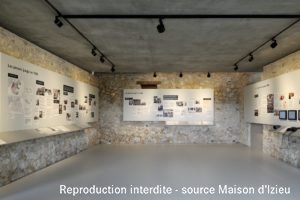 On the ground floor of the barn, the trial of war criminals, international military tribunals and crimes against humanity are dealt with in depth. The main French collaborators are discussed, as well as the Nuremberg and Klaus Barbie trials.

Other genocides and crimes against humanity of the 20th century are also discussed.

Another room with 4 screens allows you to consult excerpts from  the trial of K. Barbie and a touch screen table provides access to lots of data on crimes against humanity, which can be consulted chronologically or by country.

After the war came the time for justice, the indispensable stage, despite its insufficiencies, even its ambiguities, to establish the different levels of responsibility of the criminals, to shed light on the mechanisms of destruction leading human beings to perpetrate crimes against other human beings and to violate the order of humanity.

In this part, the constitution of the International Military Tribunal, the post-war trials, including the 1946 Nuremberg trial where the telex relating the roundup of the Colonie d’Izieu on 6 April 1944 was produced for the first time, and the trials of Nazi criminals, including that of K. Barbie in 1987, are discussed.

Mass crimes had taken place before the Second World War. Others have been committed since then, others are still committed today. The 20th century is the century of the construction of justice to prevent crimes and fight against impunity.

This application brings together the crimes against humanity in the world committed since 1945 and questions the place of international criminal justice according to the different political contexts of the countries.

Theme 3: remembrance and its creation 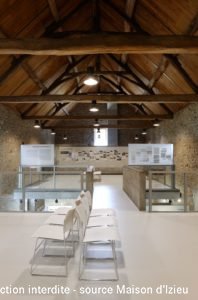 At the end of the exhibition, on the first floor of the barn, the exhibition makes you think about the creation of remembrance, based on the history of remembering the Izieu home, with a European perspective on this creation and a comparison between different countries’ perspectives.

In the villages of Izieu and Brégnier-Cordon, since 1946, the memory of the colony has remained alive. Over the years, commemorations have followed one another: private tributes from families or relatives affected by the event, official anniversary ceremonies. Since its inauguration on 24 April 1994 and until the end of the 2000s, the Izieu Memorial was the first and only place in France dedicated to the memory of the deportation and extermination of Jewish children.

The memory of the Shoah was expressed from the 1970s onwards by the voices of the victims and their descendants, by associations and civil parties in trials, but the monuments and places in which it is embodied are much later. Everywhere, in France as elsewhere in Europe, the construction of memory follows more or less complex paths, closely linked to national political contexts.

This last part of the exhibition invites the visitor to discover and think about the mechanisms of memory construction.

THE GLOW OF IZIEU
180° immersive poetic experience in augmented reality

Installed in the third part of the permanent exhibition, Les lueurs d’Izieu is a poetic and immersive 180-degree experience combining augmented reality and lightpainting. Far from a historical reconstruction, the three 5-minute episodes allow visitors to discover a part of the history of life at the Colonie d’Izieu in a poetic way:

An immersive experience directed by Robin Shuffield and lit by Jadikan.

A Zorn Production International – Odoxo – Maison d’Izieu – Pictanovo production. With the support of the Ministry of the Economy, Finance and Recovery, the Ministry of the Armed Forces, the Auvergne-Rhône-Alpes region, the Centre national de la Cinématographie and the Fondation Solidarités by Crédit agricole Centre-Est.

THE APPLICATION: THE K. BARBIE

In the third part of the permanent exhibition, access the application dedicated to the K. Barbie Trial of 1987. The first trial for crimes against humanity in France in 1987, it definitively anchored the Izieu roundup in the French memory landscape. The Maison d’Izieu preserves more than a hundred hours of the K. Barbie trial concerning the Izieu case.

We use cookies on our website to give you the most relevant experience by remembering your preferences and repeat visits. By clicking “Accept”, you consent to the use of ALL the cookies. However you may visit Cookie Settings to provide a controlled consent.
Cookie settingsACCEPT
Manage consent